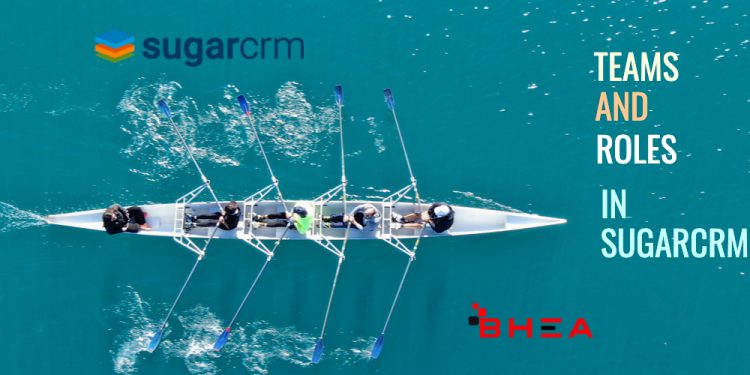 Best tips to manage teams and roles in
SugarCRM

Why Teams & Roles are Important in an Organization?

If you understand the importance of using Teams and Roles, you will also understand how to use it and why we should use them intelligently.

Let’s assume if you don’t set up Teams and Roles and create 20 users in the system. So if each user started accessing the system and created all the records, there can be mismatch and unorganized data in the system which leads to havoc.  To make things clear, Let us understand the users first.

Assume, the users in your organization are of the following types.

On the other hand, if you are using a combination of teams and have not set Roles in SugarCRM, they see all the 30 odd modules that come with SugarCRM. Roles are predominantly used to ensure the users see only the modules and fields that they need to see.

What are SugarCRM Standard Modules?

For the above mentioned example scenario, let us create two different roles one for Sales Team and one for Support Team. Let us call them Sales Role and Support Role.

SugarCRM Role Management is available only for admin and you can go and create two roles “Sales Role” and “Support Role”. The moment you create a Role, it will list all the modules and their access rights next to it. The first selection after each module is “Enable / Disable”. If you do not select anything by default the system enables all the modules.

For each role, you have access to the “Assign Users Sub Panel” from which you can add users to assign them to the required Role. Once you assign any users to a Role, the user sees only the modules that are enabled for that Role.

From the moment you assign the roles to the corresponding users, they can see only the modules that are useful for them. Of Course, this is not the only reason why we need to set up Roles.

Now if any of the users create any new records they are visible for them and also to the other users.  At this moment, everyone sees others records and in general you do not want Sales Executives to show their colleagues all records.

Step 3: Set What each Role Can Do and Cannot do

The access to the system allows people to create and delete records in each module. Nevertheless, you need to control what each role can do and cannot do. Instead of giving each role all permissions, the next step in the process allows you to delegate action that can be taken by them accordingly.

The next set of selections after the enable / disable button is to set permissions for that role to “Edit (Create and Edit), Export, Delete, List and View.

Let us say for “Sales Role”, against the Accounts module if you choose “None” for Export and Delete, any user who has a Sales Role will not be able to export or delete any records from the Accounts module.  Similarly if you allow the role for “List” and View as “None”, the user will be able to see in the list view all the records but he cannot click on it and open the record to see full details.

So we have to decide for each of the SugarCRM modules what permissions they need to have and accordingly select the remaining column of the Role Management screen for all modules that are enabled. If we do not choose anything then by default the role will have access to all activities.

In case, if we allow Edit facility to a role, then he will be able to edit all records. So SugarCRM Role Management screen gives us to choose the “All or Owner” option so that he can do those tasks on all records or only the records owned by him.

The biggest challenge at this moment is if you want the sales team to see each other’s Accounts and Contacts but want to restrict team seeing their opportunities and activities from each other.

But you have the challenge that each role sees Accounts and Contacts from multiple countries and multiple teams that you have internally.

In such situations, Teams play a major role here.

We want visibility among sales folks restricted based on the geographical teams they belong to so we need to first create 3 Teams North America Sales Team, APAC Sales Team and Europe Sales Team. Once you create the sales team, assign the corresponding team users to the teams.

Once you assign users to the teams, the accounts and contacts module show the users only the accounts and teams created or owned by their own team members and not other geography teams. Also, there is one more step in between to ensure this visibility works smoothly.

Sometimes, I want some accounts and contacts to be available for other team members and sometimes I don’t want certain key accounts to be visible for any team member. So in such a case we have step 5 to be followed.

In order to ensure we can give visibility of records across the teams and to restrict visibility of records among the other team members, SugarCRM has provided the option of Global Team and Private Team. SugarCRM systems come with a team available already by name “Global”. The reason why it is named as “Global” is whatever record that is assigned to team “Global” will be visible to every active user if his role allows the module. So if you create a new account and assign it to the “Global” team, whoever has access to the Accounts module will see that record.

Exact opposite purpose is for Private Teams. Whenever a new user is created in the system, the system creates a new team with that user name. For example, if we create a user by name john, a new Private Team by name John Private Team will be created and by default each user is part of two teams by name Global and his own Private Team.

So the records that are assigned to the private team are visible only to him. This brings in a new concept of a user being part of multiple teams. Because the moment you create a new user, he is coming up as assigned to two teams called Global and his own private team.

If a new user has been created and we do not allocate it to any team, by default he will have a Global team and a private team by his name. Also, his default team will be set as “Global”. So whatever record he creates in the system gets assigned to him and gets the “Global” team associated with the record.

If we assign “APAC Sales Team” to a user, by default when he creates a new record it will still be global and visible to everyone. So we need to go to the user record and change the default team to “APAC Sales Team” so that all records get assigned to this team. If he wants to explicitly change this or also add more teams to a record he can do.

Every user can be part of a minimum two teams by the name Global and his ownPrivate team and that can be added to as many teams as possible. Based on the teams added he gets visibility into the team records based on his role.

Sometimes the manager needs to view the records of his reporters. The system handles this if we choose the “Reports To” user for each user. So records created by the team members are easily visible.

Step 8: Separating the Roles of Manager and Executive

To ensure Managers have some privileges it is always good to have a separate role for a Manager because they view information of multiple users who are reporting to them. So access to the Reports module and viewing facility for Opportunities and Activities might be required.

We have done well with the Sales Team and now we have three teams and they are continually adding more Accounts and Contacts to the CRM. And each team is seeing their own team’s accounts and contacts. But the support team is still a small team and supports all the customers from across the teams.

Since Support Team also should have roles, we define Support Executive Role and Support Manager Role and define what all activities and visibility are available for them. As it is a separate team, we can create a “Support Team” and make all the user’s default team as “Support Team”.

This is when multiple teams are useful to view the records that are created by other teams to these team members. Support Team members get added with the three Sales Teams so that they are part of the Support Team and their default team is “Support Team” but they are also members of “APAC Sales Team, Europe Team and North America Team”

Depending on the requirement you can use these multiple teams. Additionally Bhea provides support packages to help you process better.

SugarCRM comes with advanced features like Field Level restriction at the Role Management module and reports generation based on the Teams.

Bhea is a leading Advanced Partner for SugarCRM and can help by Admin Training – Team and Role Management or by implementing your CRM end to end.

We have packaged implementation services with the tagline “Getting Started with SugarCRM” that makes you budget fixed but quickly rollout SugarCRM for your organisation.

If you are interested in knowing more about in details follow here.If you want to get more knowledge on its practical implementation, Contact Us for further assistance.

Why you should quickly say goodbye to ...